Ernie Ball, the world’s leading manufacturer of strings and accessories, has been making high-quality electric guitar and bass strings since 1962. World-class players like Paul McCartney, Keith Richards, Eric Clapton, Slash, Jimmy Page, and Buddy Guy have all played Ernie Ball strings to create their unique sound. We use the latest technologies and finest materials to continuously enhance your playing experience and provide an unparalleled palette of expressive options. 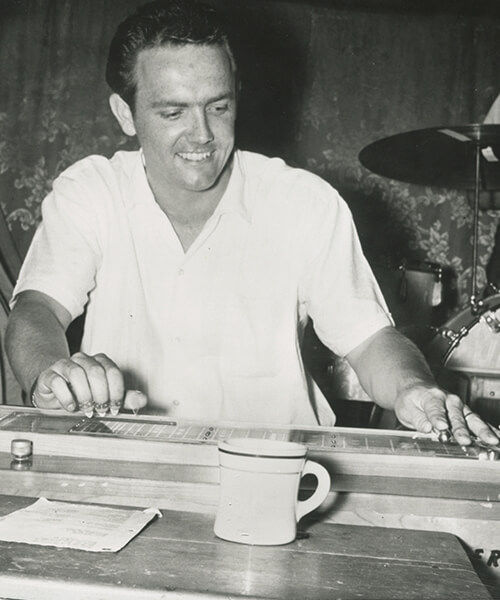 While Ernie was in Arizona he heard about the radio repairman named Leo Fender who was making solid body electric guitars and steel guitars. Ernie took leave, drove to Fullerton and he and Leo hit it off. Ernie thought this was the best thing he had seen. From there he beta-tested for Leo and became an endorsee. 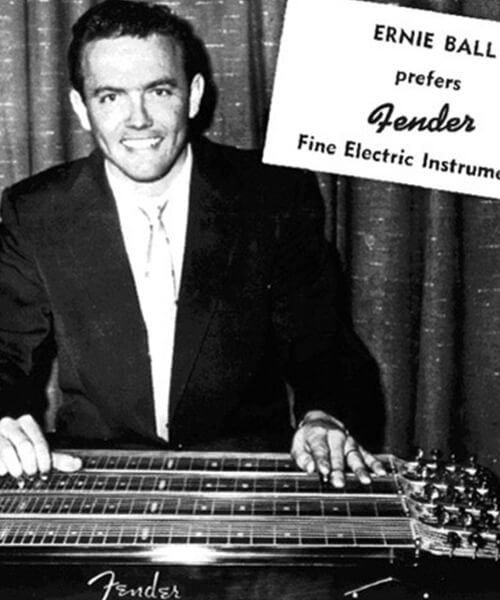 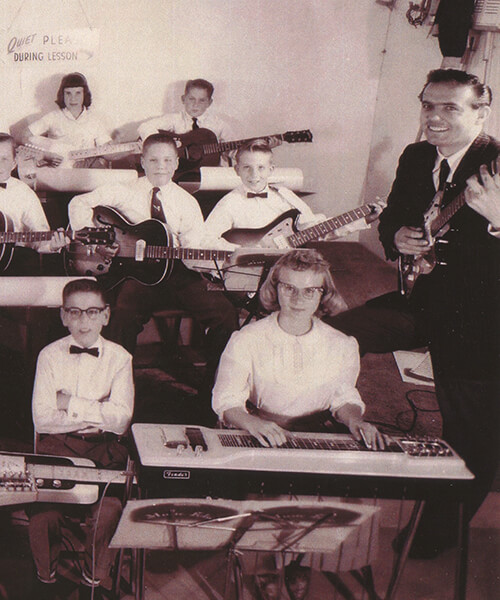 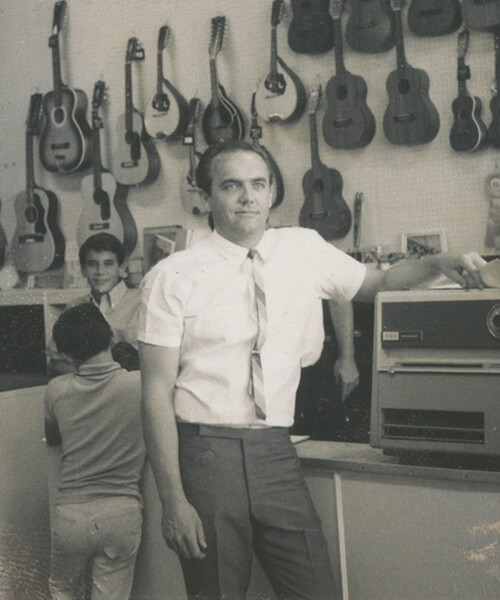 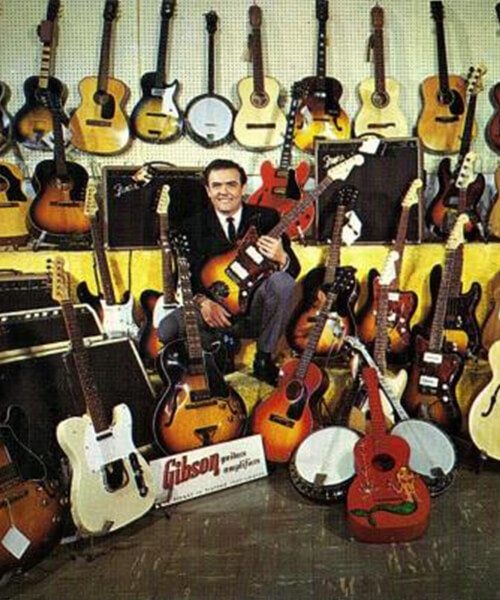 In the mid-1950's Ernie opened what was the first electric guitar store in the world. Never accepting the first forms of change, people warned him that he would go broke. Though he did just that many times, first and foremost Ernie always paid his bills. Finally in 1958 things started to turn around. 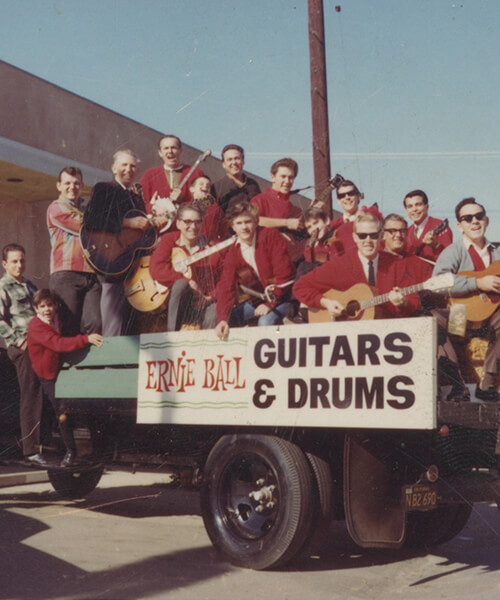 Ernie Ball expands his business and starts to sell drums. 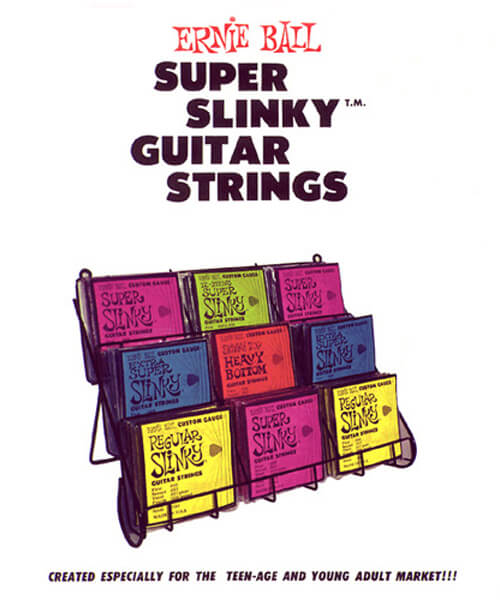 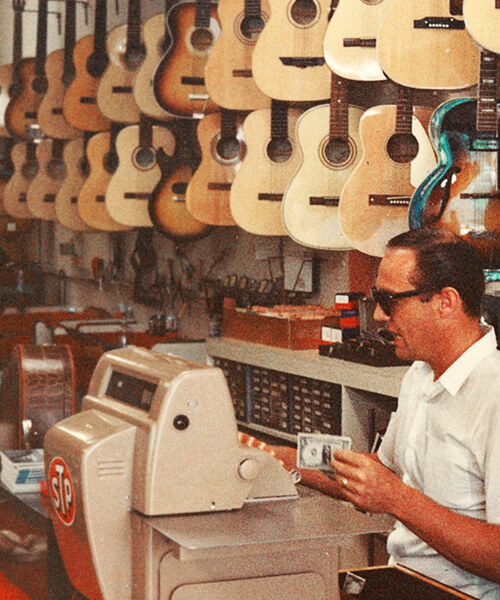 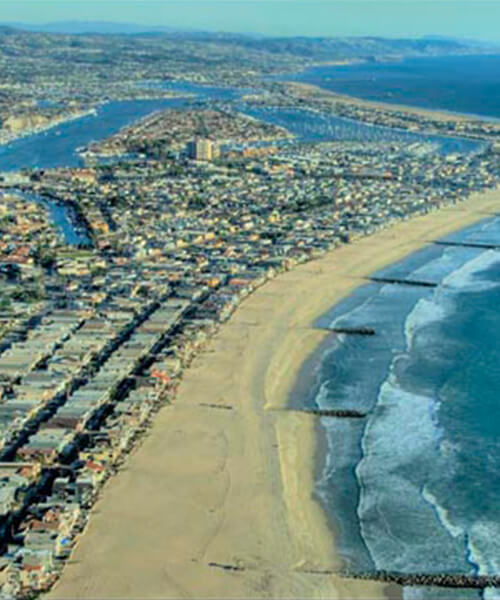 Ernie Ball closes the retail store and moves to Newport Beach, CA to concentrate on the string and accessories business. Ernie also had a vision of working part-time, surfing and flying airplanes. However, the guitar business took a new and heightened direction and things would never be the same. 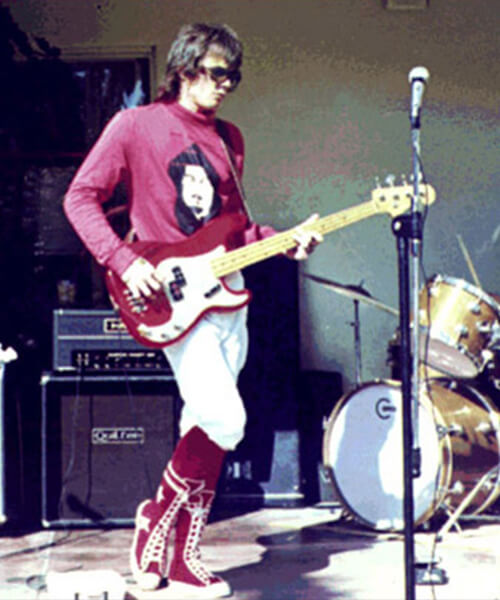 Sterling Ball was involved with the family business at the early age of 9 years old.  Running cash registers and packaging strings, he worked part-time after school and on weekends. Being part of a very musical family, Sterling picked up the bass and guitar early on and was involved with many bands around the LA area. This early musical adaptation led to a life-long career in the music business, most notably working as a beta-tester for Leo Fender's new bass, the Music Man StingRay. 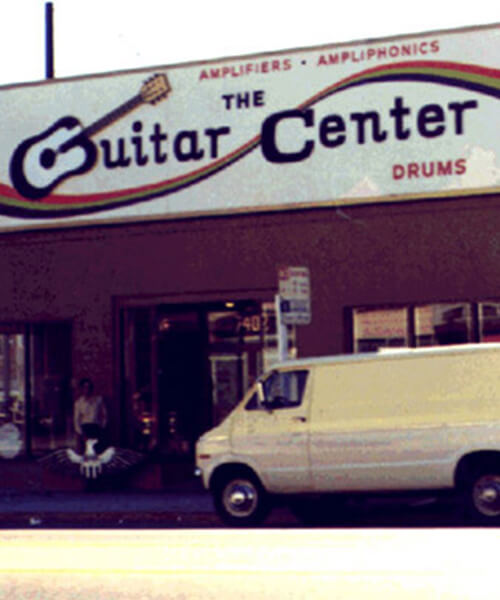 The first Guitar Center music store in 1971, receiving an Ernie Ball shipment for a local Hollywood promotion. Now with over 260 stores nationwide, Guitar Center and Ernie Ball continue to work together on many promotions giving unsigned musicians the opportunity to perform live on concert stages throughout the world. 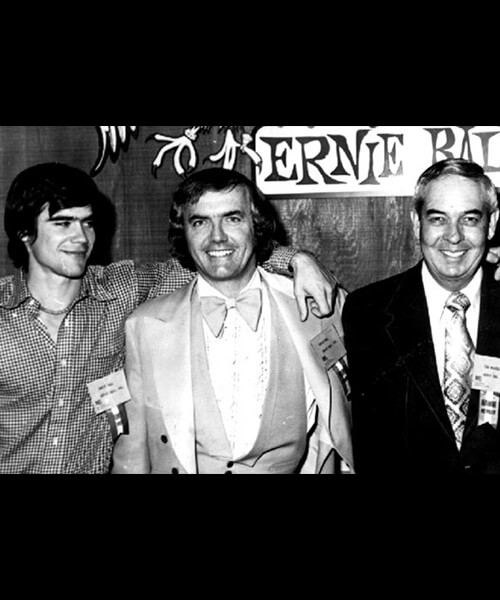 David Ball, Ernie Ball, Tom Walker at NAMM. Ernie and Tom Walker met early on when Tom was the west coast Fender sales rep calling on Ernie's guitar shop. They became great friends and Tom Walker was asked to be the godfather of Sterling Ball. In the early 70's Tom designed a new preamp circuit that would eventually become a new line of amplifiers for the Music Man company. Founded by Tom Walker, Leo Fender and Forest White in 1972, the Music Man company was eventually bought by Ernie Ball in 1984. 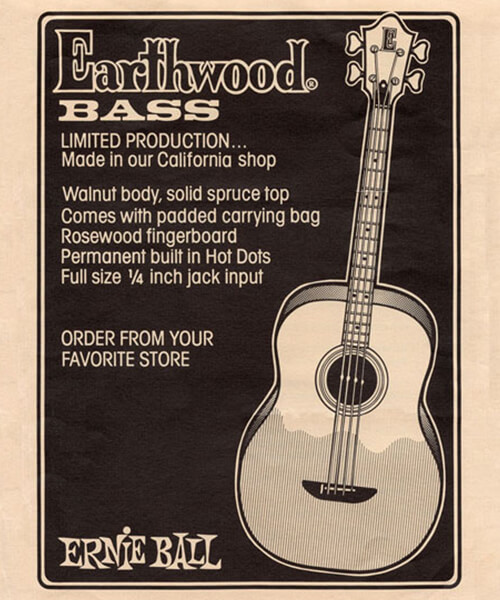 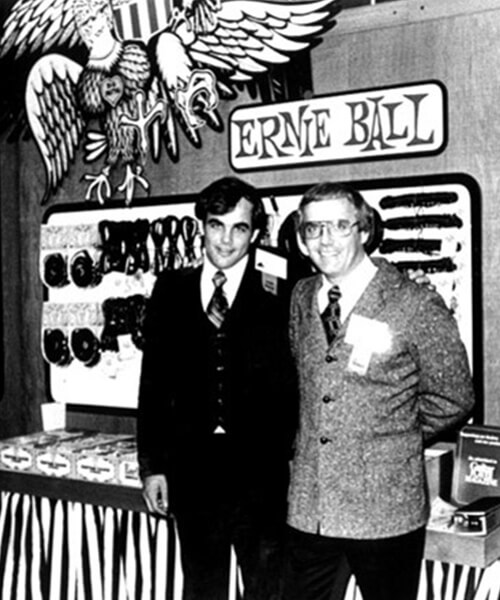 The Origins of A Family Business

In early 1973 Sterling decides to join the team as traveling sales rep and fully throw himself into the evolving company. Sterling says to the inside sales manager at the time “Give me a month, a gas card and that old Chevy out in the parking lot that's not being used, pay me only on what I sell and if it isn't worth it, then fire me.” Needless to say, Sterling went on to set record sales that year and hasn't looked back since. 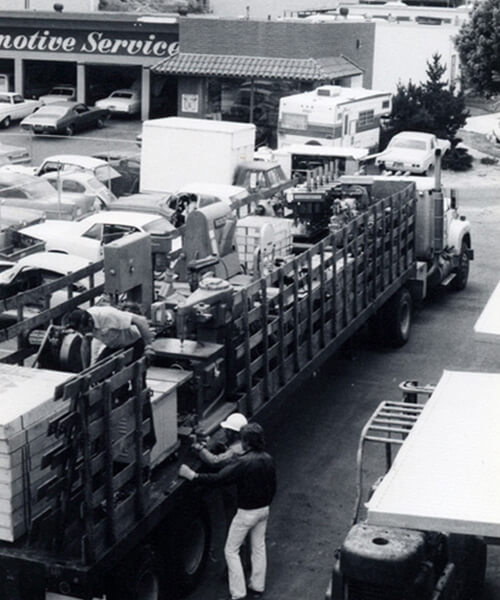 Ernie Ball moves corporate headquarters to San Luis Obispo,CA. The string and Earthwood facilities are packed up on their way to a new home in March 1979. 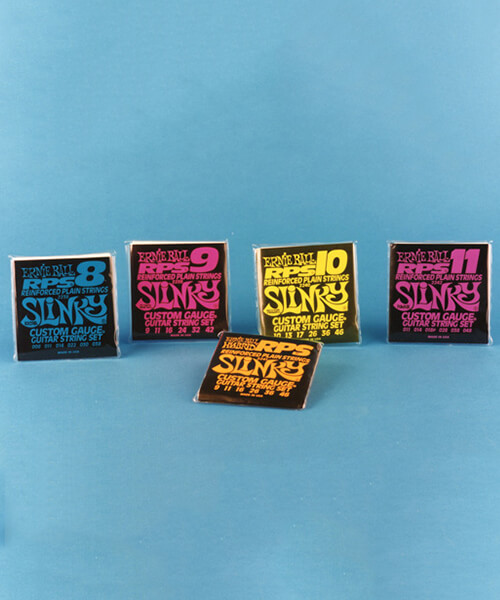 Ernie Ball R.P.S. (Reinforced Plain Strings) Slinkys enter the market and quickly become an artist favorite. RPS strings feature an extra wrapping of brass around the ball end of the string for added strength and stability. 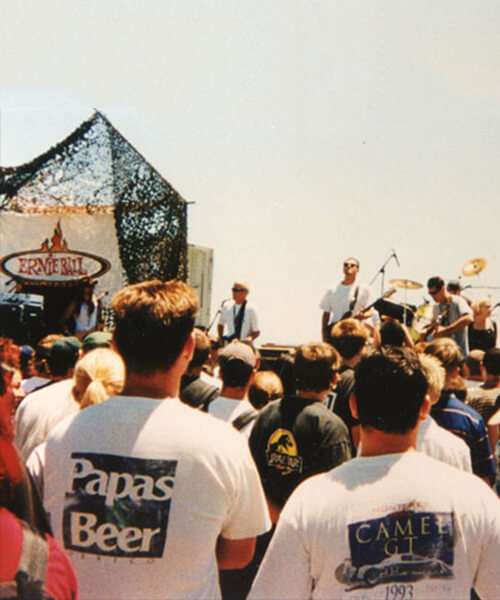 The very first Ernie Ball Battle of the Bands at the San Francisco Warped Tour stop. The Battle of The Bands 1 has 18 stops in its first year and develops into a long-lasting relationship with Kevin Lyman and The Warped Tour. 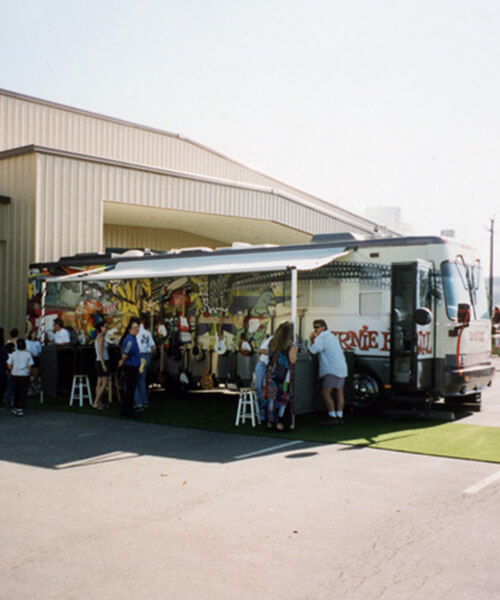 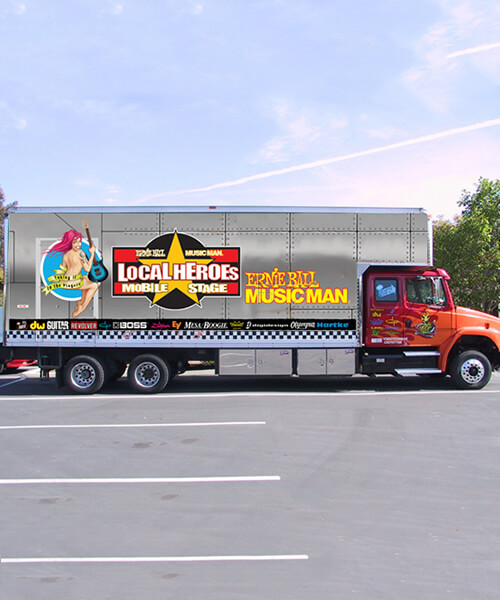 Ernie Ball mobile stage (MS1) makes its debut. The mobile stage has become one of the most sought-after mobile venues around. Each year tens of thousands of concertgoers flock to see what new hot band is playing on the Ernie Ball Stage at The Warped Tour. 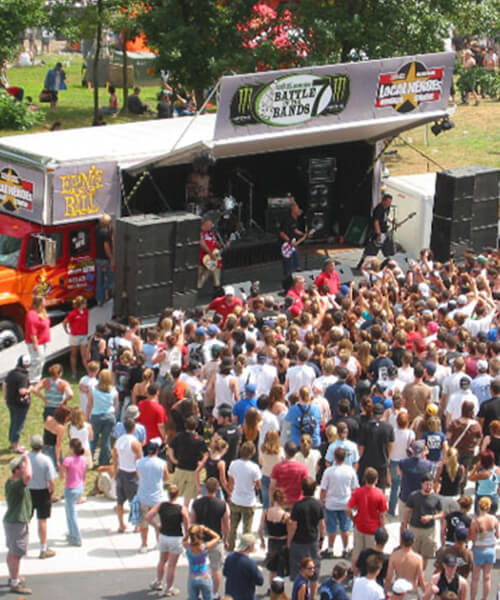 Battle of the Bands in Action!

Aerial shot of the Ernie Ball Mobile Stage in action at the Vans Warped Tour. The Battle of the Bands promotion gives over 500 bands the chance to play live on the Ernie Ball Stage each summer, and hosts upward of 25,000 band profiles at battleofthebands.com 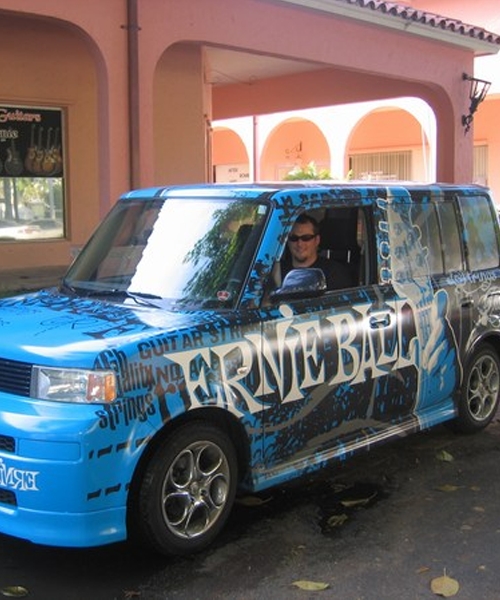 Ernie Ball “Scion Tours" hit the US, visiting dealers and stopping at every roadside attraction along the way. Dealers and end users alike are able to track the Scion's progress online with an up-to-the-minute website featuring blogs, photos, and insight as to what the Scion team is up to. 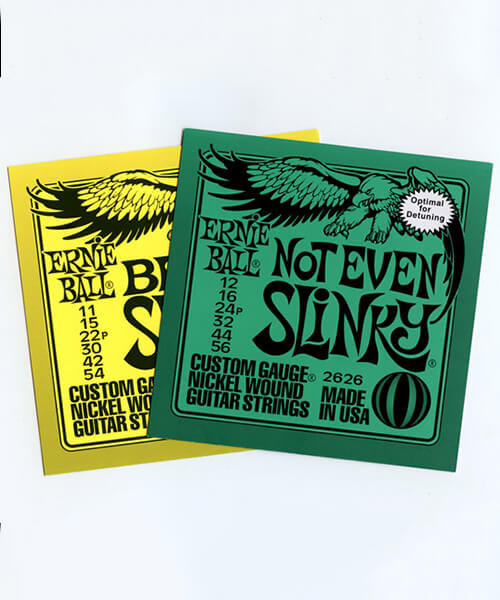 Beefy and Not Even

Beefy and Not Even sets join the Slinky lineup. Sensing the younger players needs for achieving a thicker, chunkier tone, Brian Ball creates string sets optimal for modern tunings including D, drop D and C#. The thicker core and wrap combination of Beefy and Not Even Slinky strings, increase the tension needed to keep strings playable at pitch. 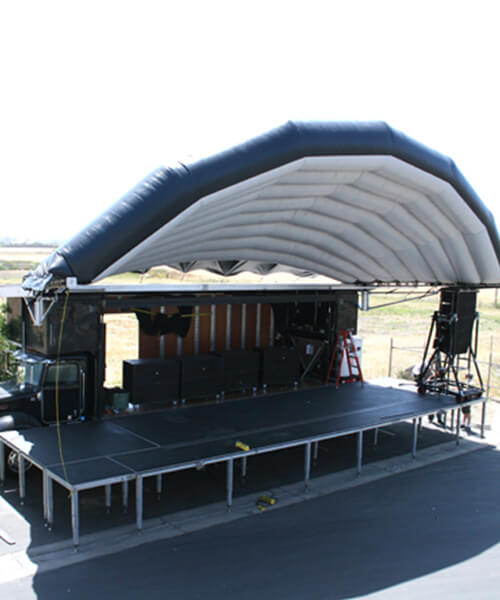 Due to the high demand generated by the first mobile stage, Ernie Ball unveils MS2! The second mobile stage now serves as one of the main stages on The Warped Tour. 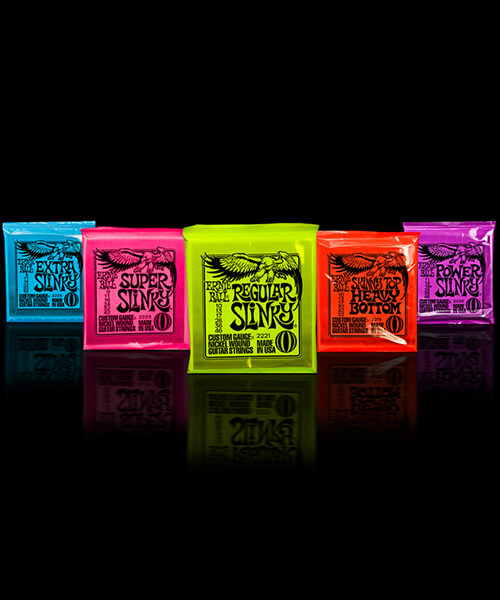 Element Shield packaging launches with wide industry acclaim. Spearheaded by Brian Ball, the new packaging aims to keep your strings as fresh as the day they were made. "We wanted to give consumers the absolute freshest set of strings possible, in addition to enhancing the merchandising appeal for retailers" Element Shield packaging has also proven to combat counterfeiting! 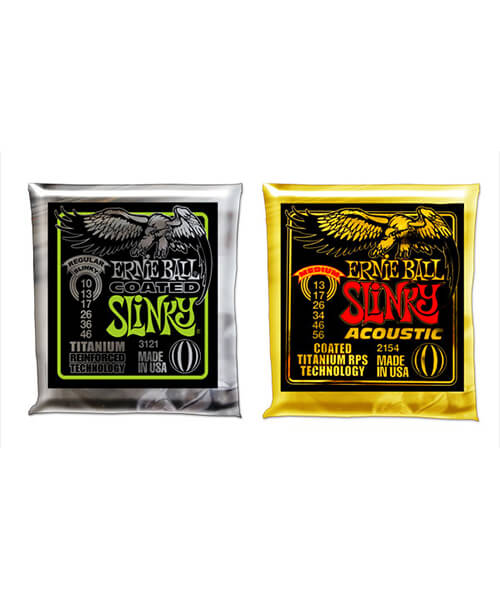 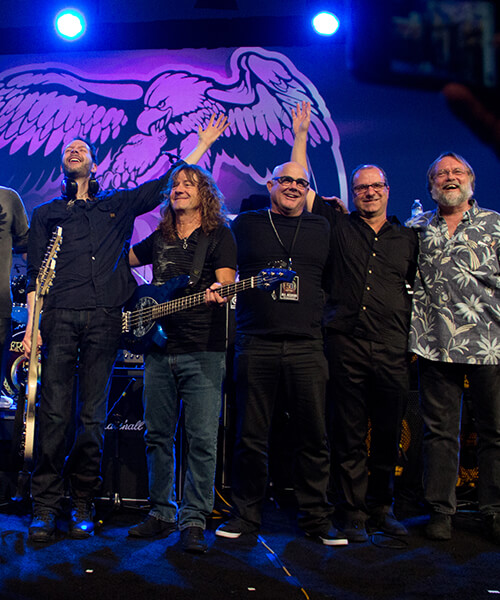 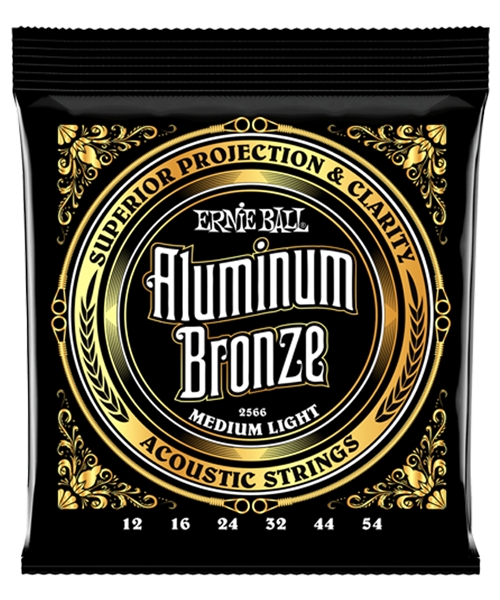 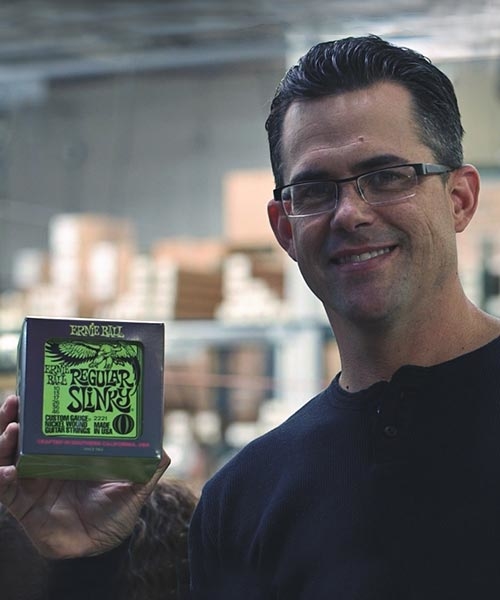 Ernie's grandson's, Brian Ball, is promoted to President. CEO Sterling Ball stated, “Since 1962, Ernie Ball Inc. has been dedicated to providing tools for artists, and we are excited to see what another 50-plus years in the industry will bring under Brian’s leadership.” 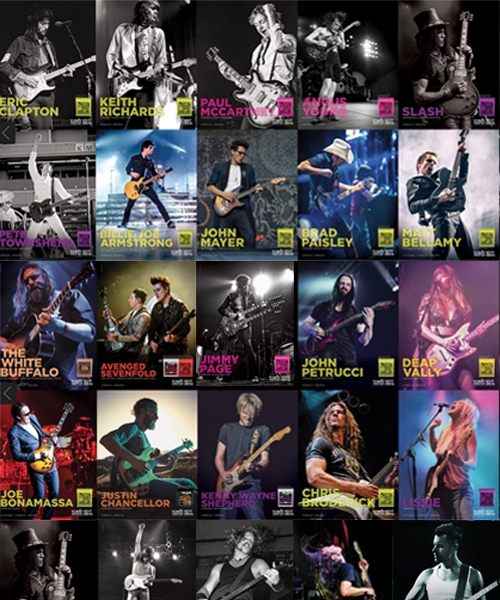 Ernie Ball launched the #iplayslinky campaign, highlighting some of the most iconic guitarists in the world that play Ernie Ball strings, including Clapton, Page, Beck, Richards, Slash, and more. Thousands of fans were also able to make their own #iplayslinky ads on our website.

Ernie Ball Slinky Flatwound Bass Strings combine the smooth feel of traditional flats with the modern power of Cobalt. An innovative new bass string that features the tonal qualities of a round would with the silky smooth feel and fundamentals of a flatwound string.

Battle of the Bands 20th Anniversary

Ernie Ball celebrates 20 years of partnering with Warped Tour to provide opportunities for bands to play live. In 2016, the longest-running Battle of the Bands program is renamed to Ernie Ball: PLAY Warped Tour, giving bands the opportunity to win over $40,000 in cash and prizes, a 3-song EP with New Found Glory's Chad Gilbert, plus a spot on the Warped Main Stage.

"Great strings can't cure a bad amp, an s-curve neck, or lousy room acoustics; but when all of these primary elements are correct, strings become bottom line! And that's where we come in. We provide for the necessary goals sought by guitarists everywhere: consistently reliable, high quality strings, reasonably priced."